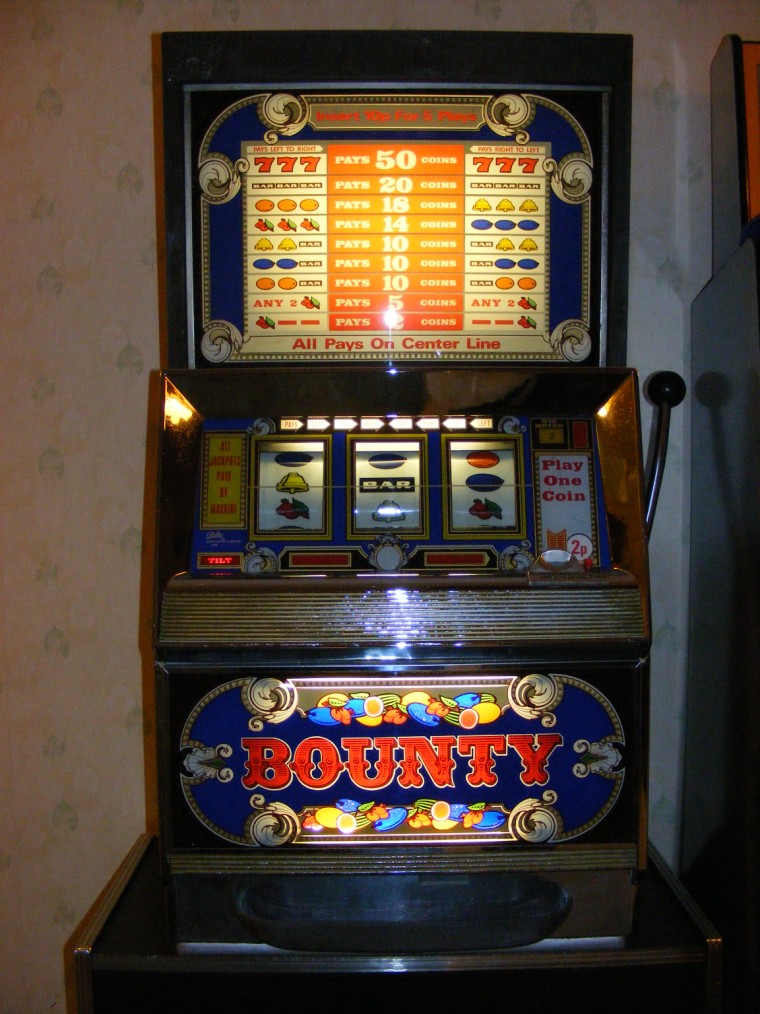 Well, this is something I've been on the look out for a very long time indeed!

and has travelled approx 250 miles to join the collection here in Croydon. This is one

of the first pics after unloading. There are a few issues to correct, most should be able to

be attended to with relative ease.

The picture below is of the machine I remember as a child. It was in small

'the' Bally Bounty! This picture was taken in about 2001 on a brief exploration

trip back whilst staying nearby. It didn't look any different!! WOW! 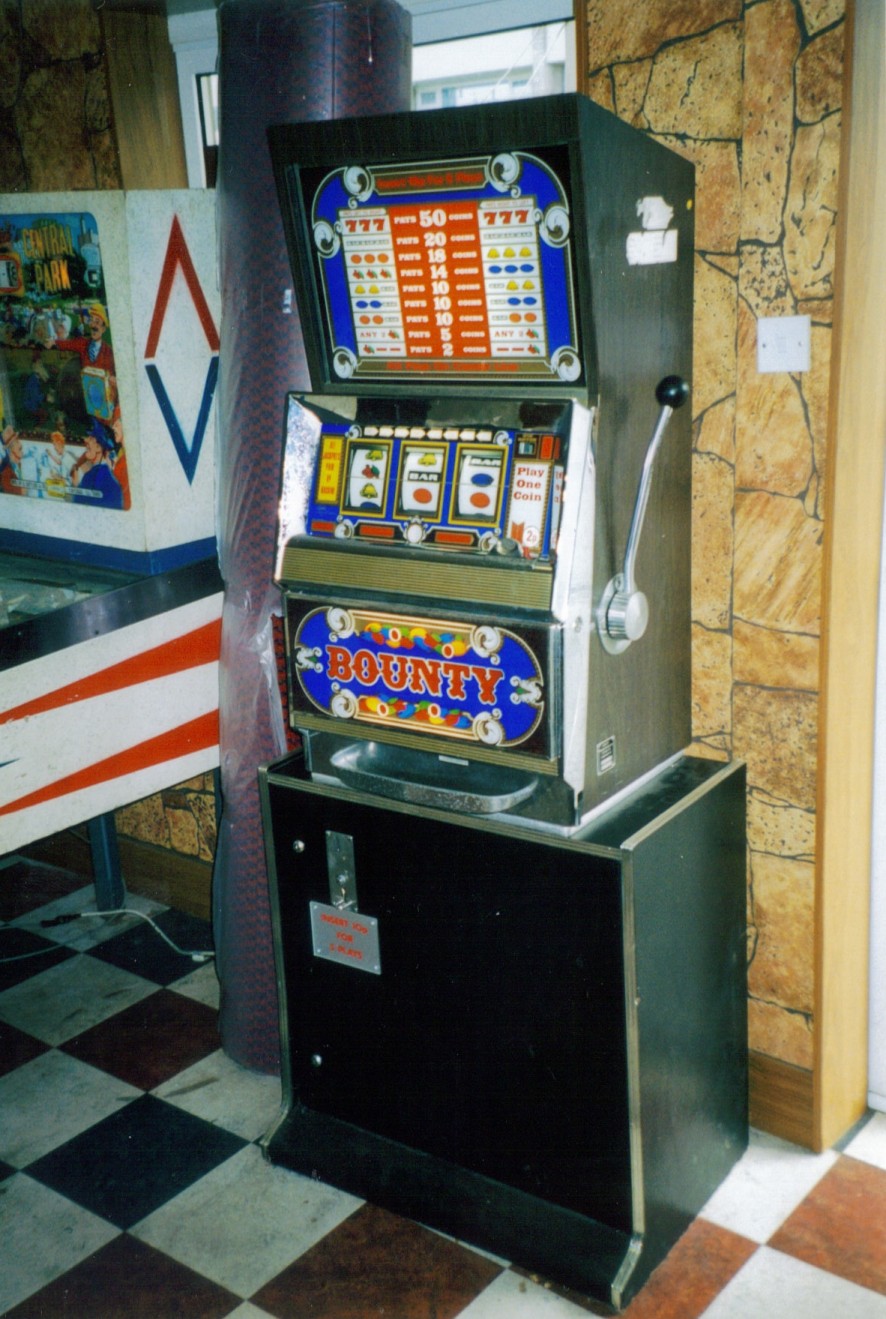 So, whilst this new addition gets brought back to her former glory, she

will reside in the hallway! She wont be alone though as there are always other

machines scattered around the house to keep her company!! 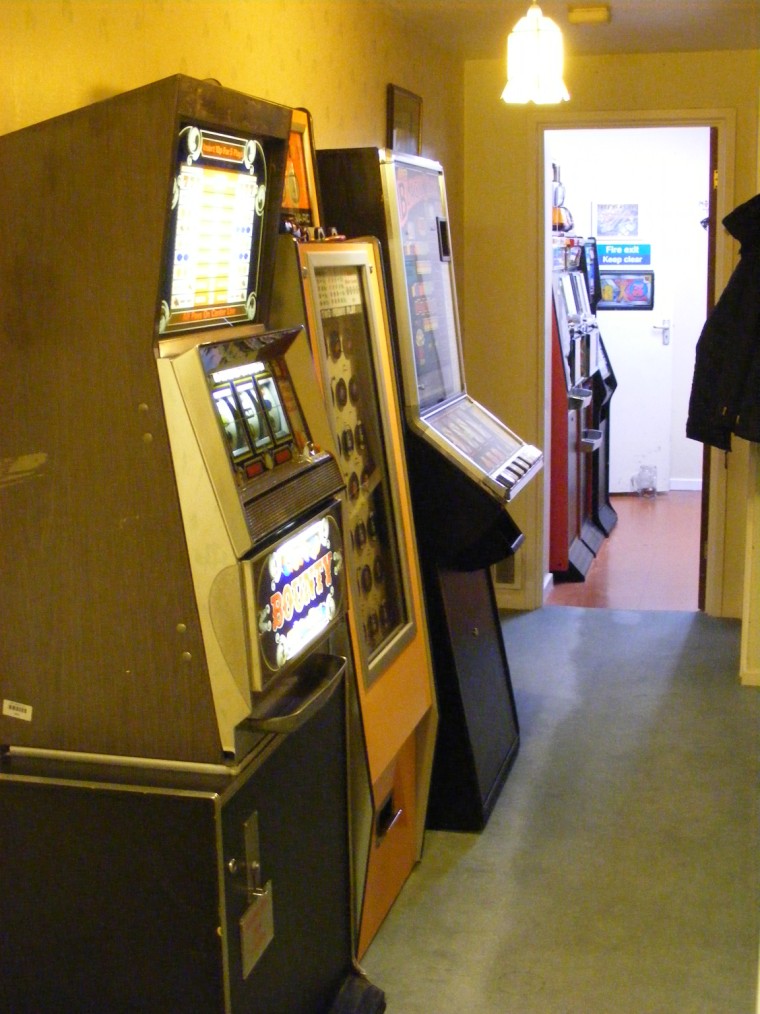 It's been a few weeks & I'm pleased to say we're almost there!!

See below for problems that I've encountered and solutions given! 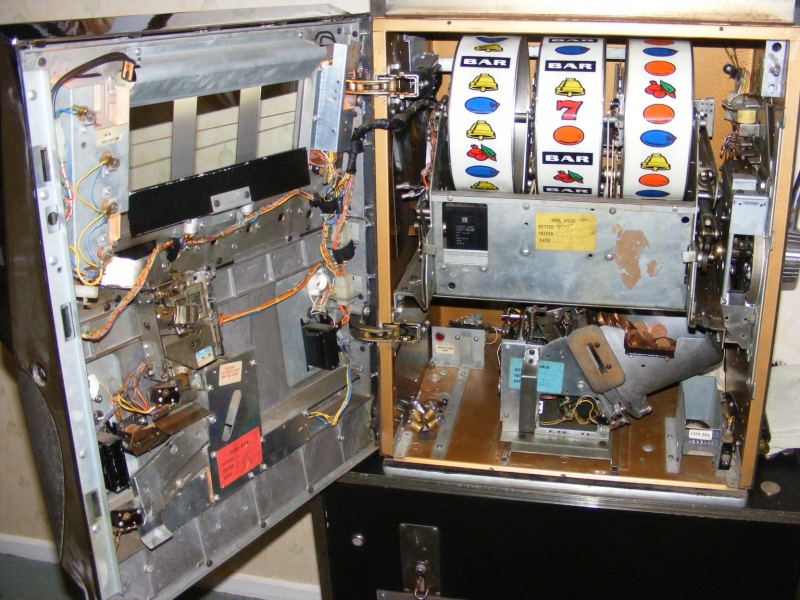 As a rule, before any work is started, it's always a good idea to have good look around the machine.

I dont want these to short out any part of the machine after it has been recently moved - and worth it too.

I removed quite a few odds and ends including a dud 10p (only pressed on one side!!) from between two fuse holders. 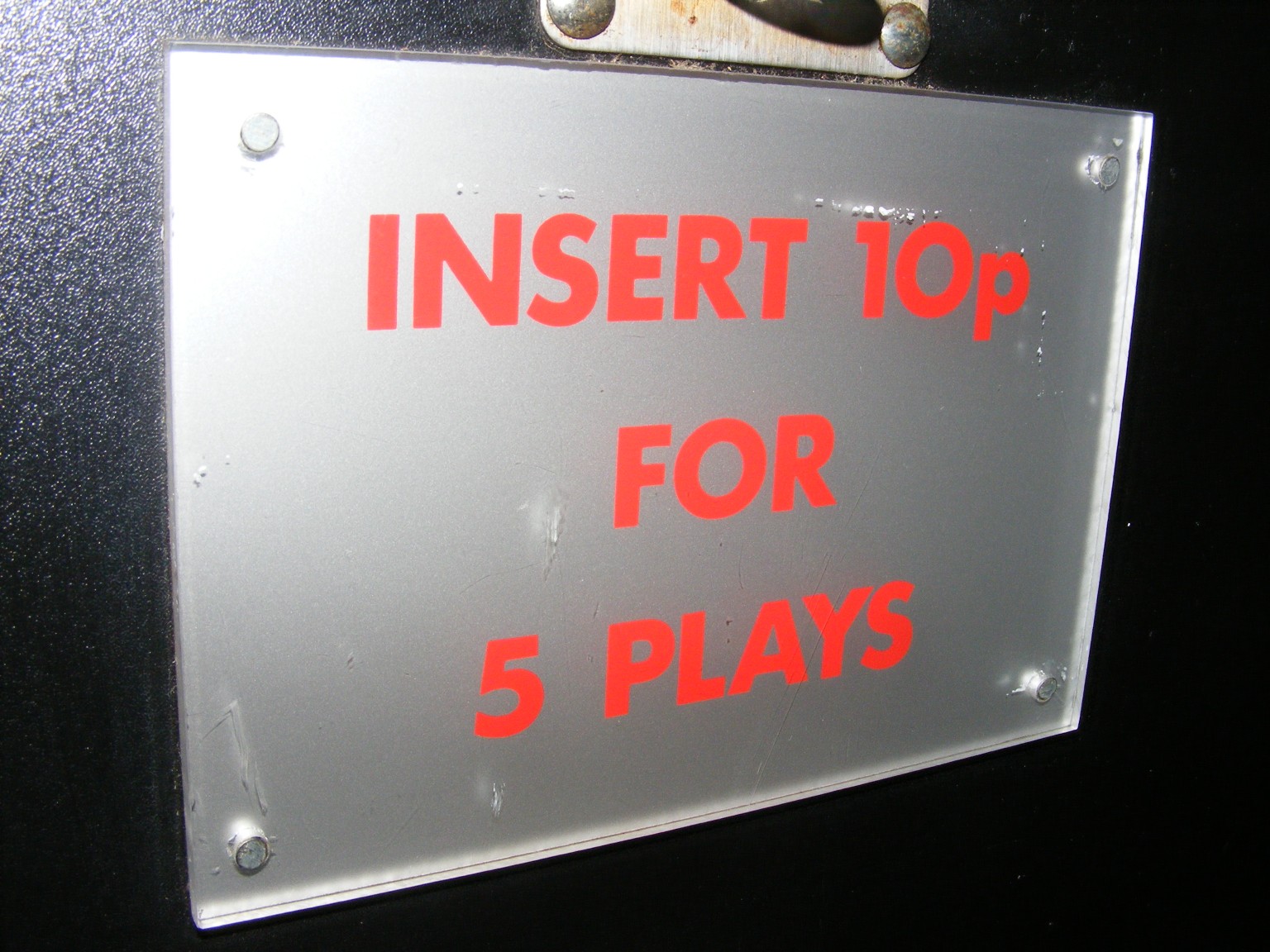 I was told that this part of the machine (set into the base unit) did not work and hadn't done for some time!

Upon inspection, two 2p's & one 10p were removed from the coin mech - the three coins were jammed in

side by side just inside the entry slot! After a simple clean - 10p's in, 5 credits out - sorted!! That simple!! 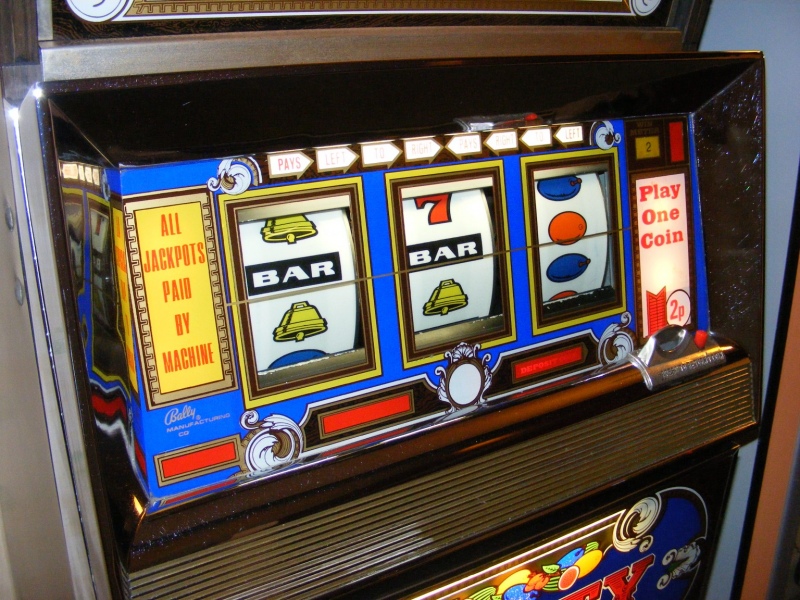 no other lights were visible. Was this a possible wiring fault to the door? Er, well, no, fortunately! New bulbs in - lights on!!

This was get easier and easier! 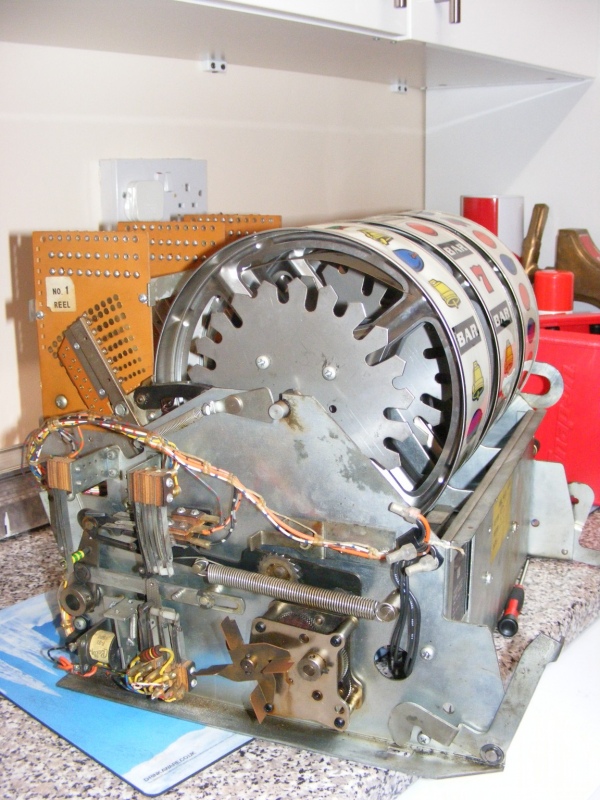 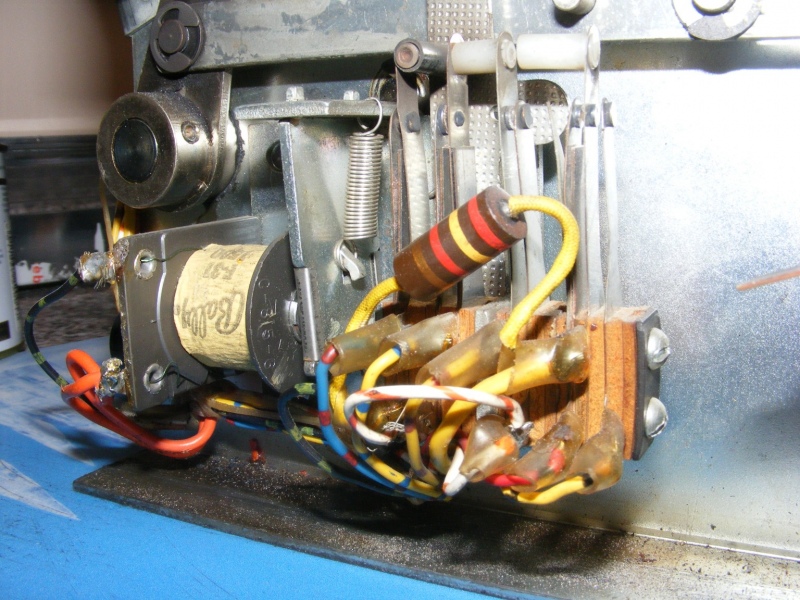 PROBLEM 4 - Handle would not release upon being 'coined'

really create some head scratching I can tell you! I'll try and keep the explanation brief! As the title suggests,

I was having difficulty in getting the arm to release (well, it wouldn't!!). Coins were being accepted by the switch

below the coin mech (on the door) and in turn activating the coin relay (on the left hand side of the reels - pictured).

The coin relay manages a number of circuits but quite simply prepares the payout unit circuits, switches the 'deposit coin'

lamp for 'coin accepted' and equally as important, powers another coil to release the handle. All of the machine's

blade switches were cleaned and the wiring was checked for continuity but still nothing! These Bally machines are

very robust and have relatively simple electrics - why wasn't it working? Just to add, I had already checked the coil

itself on another machine and it worked perfectly.

After cycling the reel assembly on the bench a number of times, it eventually became obvious that one single switch

at the end of the coin relay was not actually making contact! With the asistance of a super bright led lamp,

it really needed a close look to become apparent! The key thing - there was the fault. It had some very fine adjustment,

put back in the machine and Bob's your uncle! Job done! 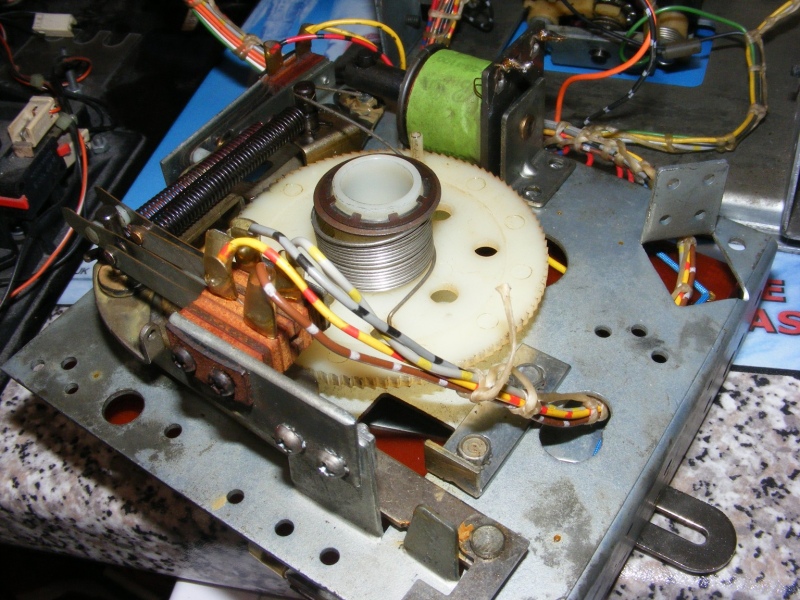 Both of these symptoms are part of the same problem. The picture above shows the the payout counter unit

which sits on the back of the hopper in the lower part of the machine. When coins leave the hopper they

are mechanically counted and step this unit forward one tooth per coin. Once the payout is complete the

machine resets itself on the next spin of the reels. The green solenoid is the acting force behind this 'reset' sequence.

Again, with a bit of patience, problem found - another switch not making. You have to really pay attention to spot it!! 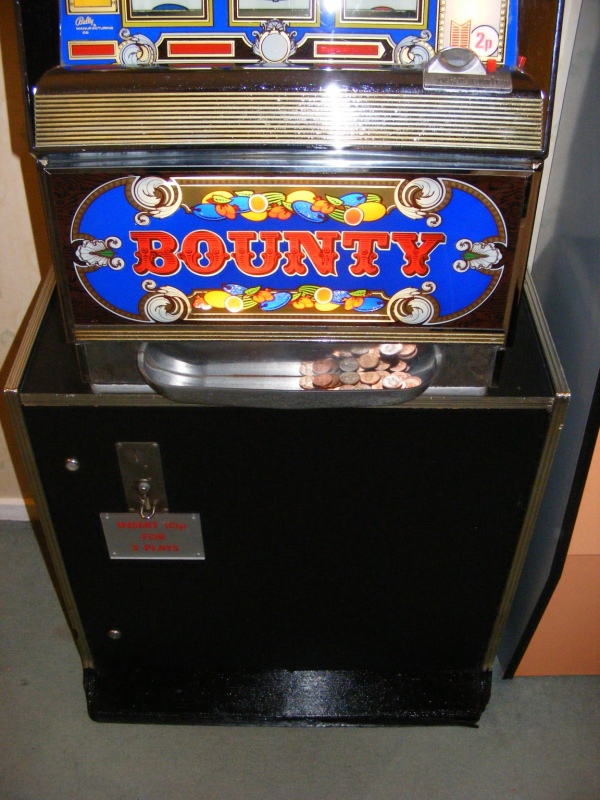 On the whole this machine is in rather good condition considering. It did have some gaming labels on the side of

the cabinet indicating that it had been on an arcade floor within the last few years (Legacy Machines)!!

Whether it happened recently or not, the base unit had suffered a small amount of damage to the front edge

of it's kick step. For the time being it has been tidied up and repainted. Personally, I think it looks a lot better

than seeing the exposed chips that stand out like a sore thumb! 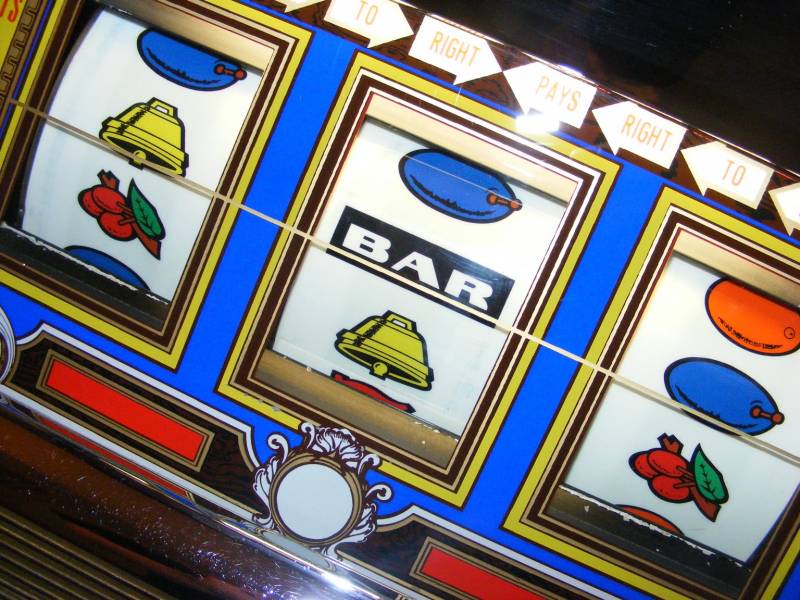 has deformed a little (in about three places). Good news, by absolute fluke, a Bally spares company in

the USA has an exact set for this machine!!! Brand new and delivered for under Ł25.00!! Bargain is what I say -

they should be on route now! 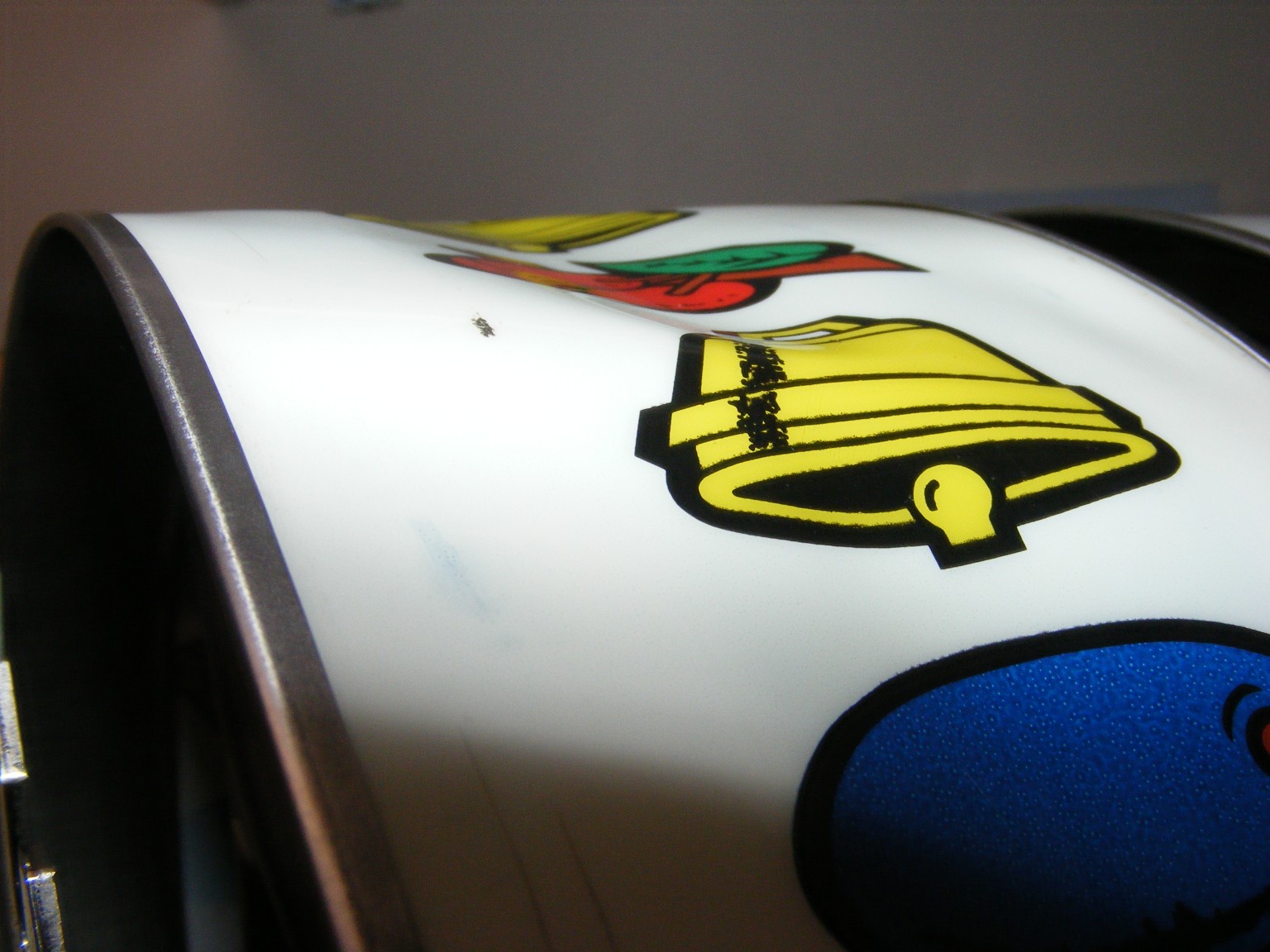 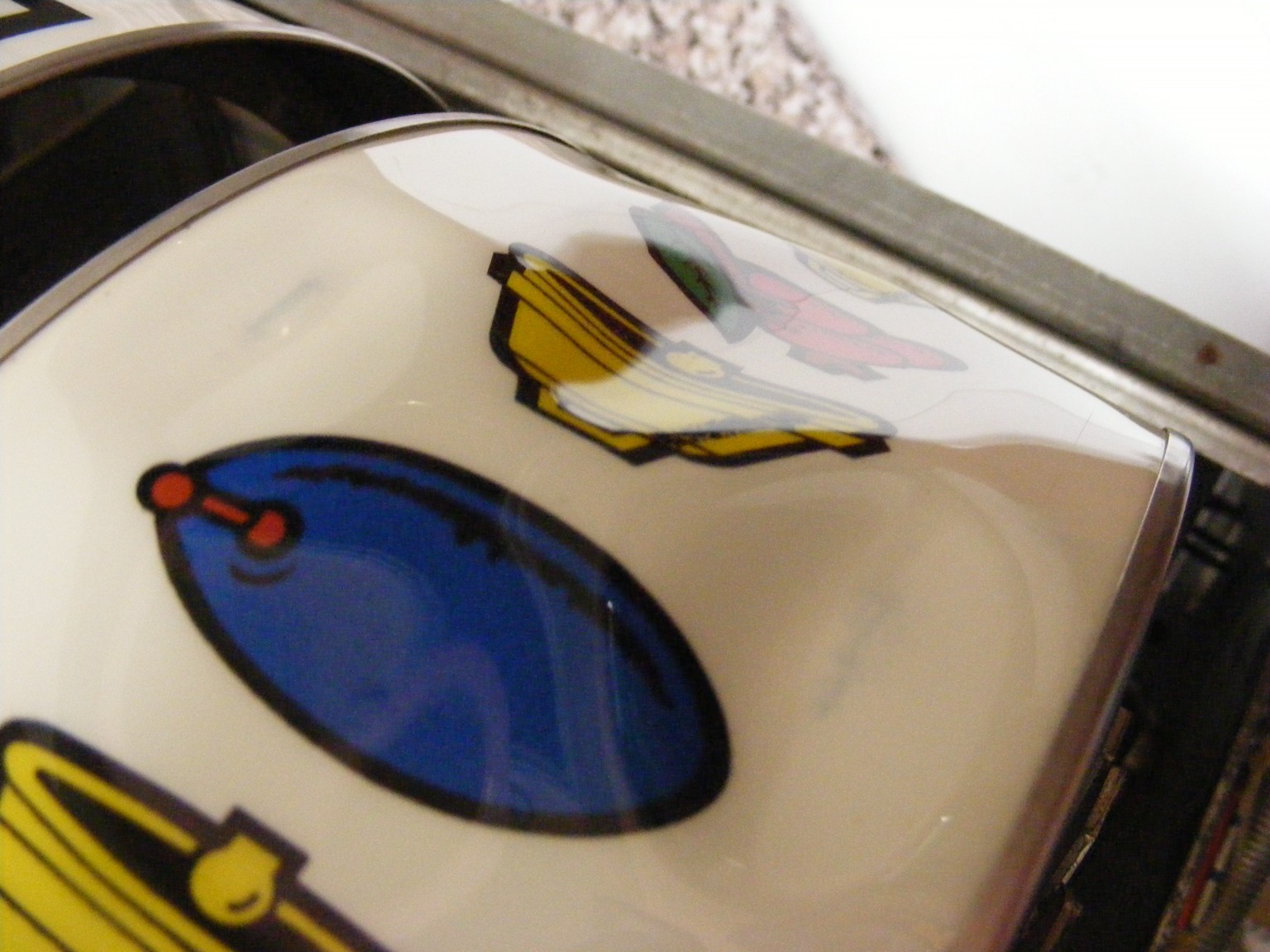 These pics better show how deformed reel 1 was in places! 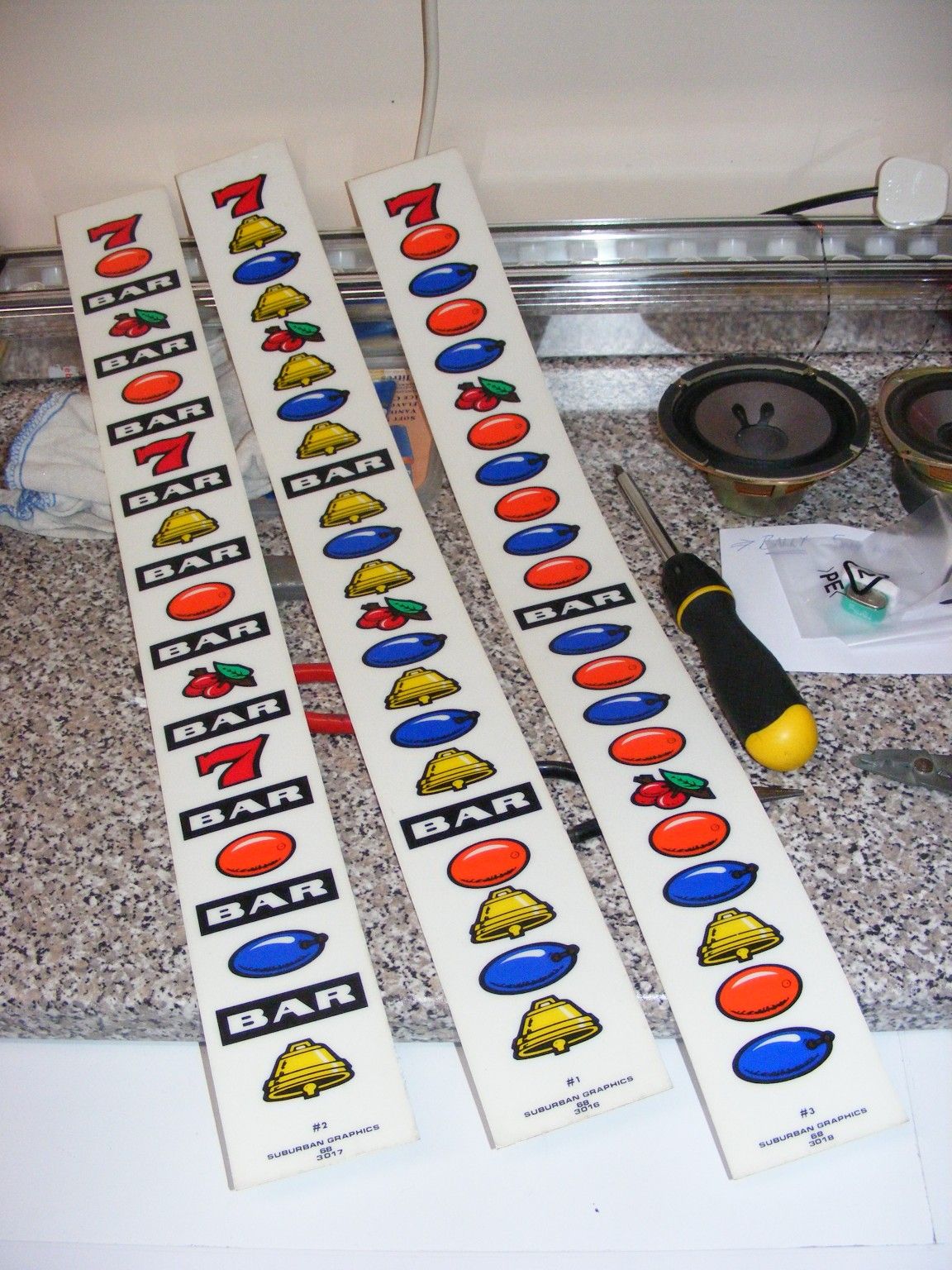 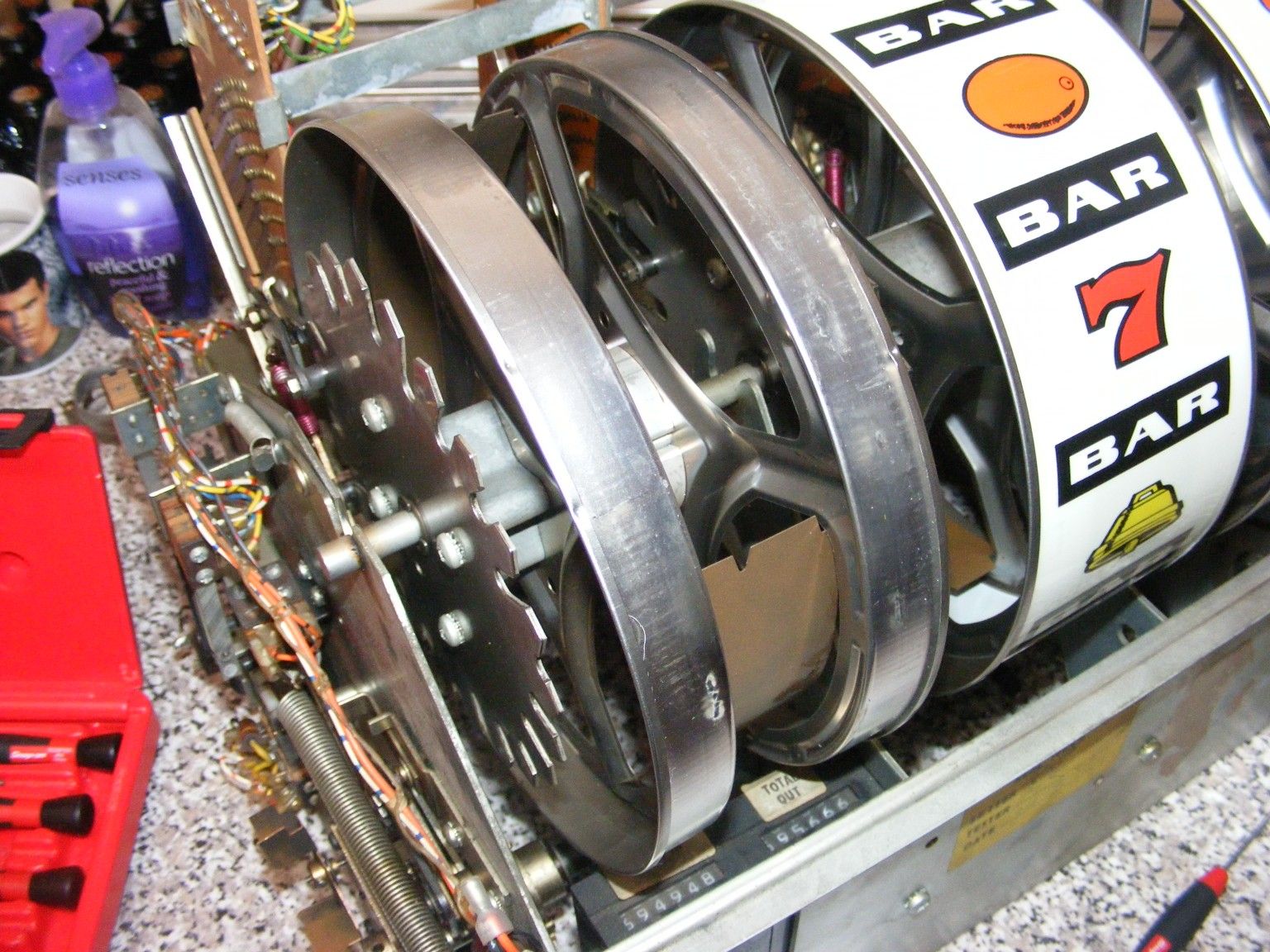 New reel bands in from USA  - now just a case of measuring up and fitting. 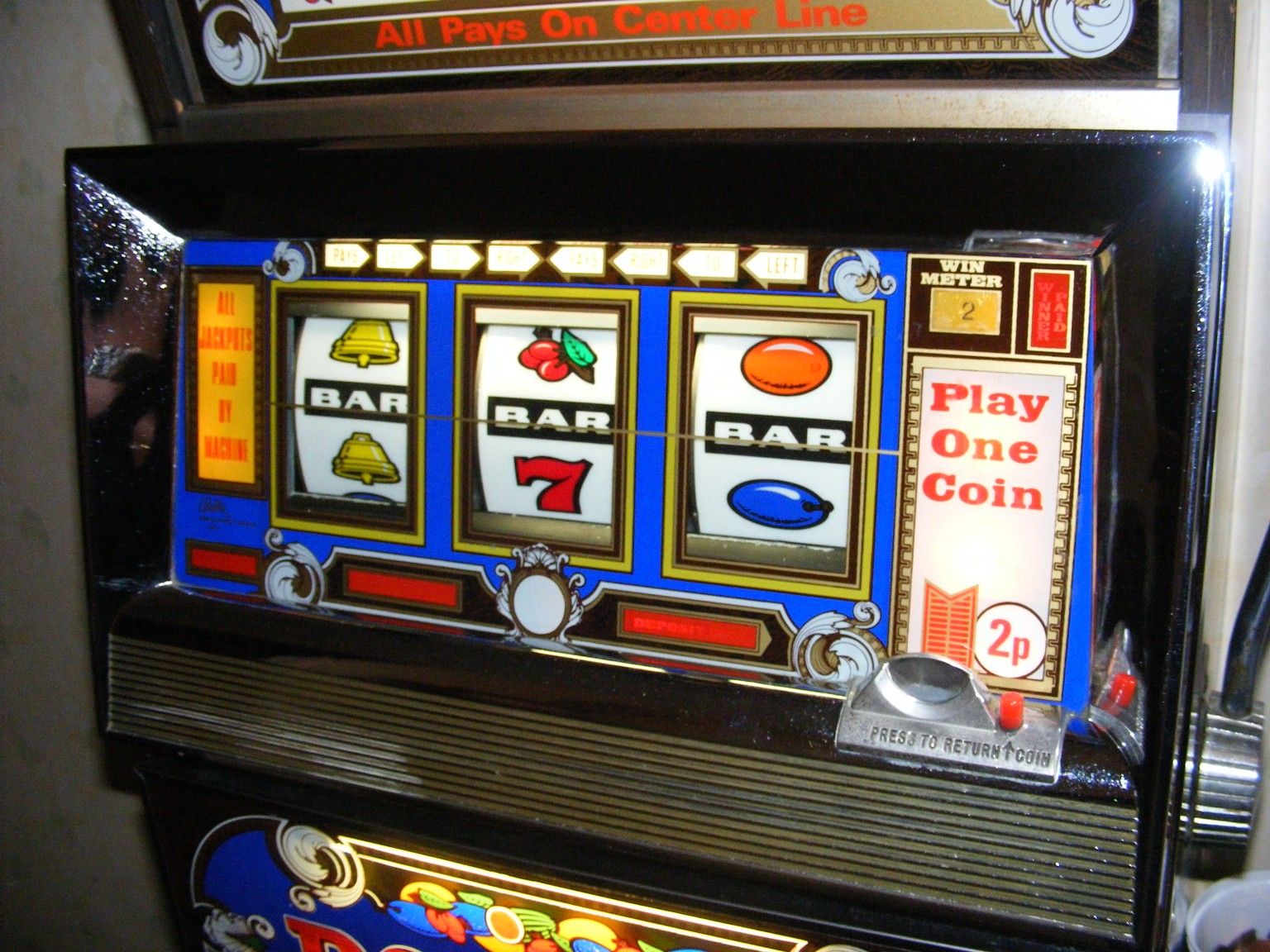 It became apparent that upon using the lower 10p credit option, I was able to obtain over the correct

of plays. There was no hard and fast rule but it would enter into a 'runaway' style situation. Sometimes it would

return pressure on the solenoid spring for it to 'count' the set 5 steps permitted - It could not progress itself properly.

The solenoid was cleaned out and a slightly more powerful spring added (from a fruit machine button!)

and she is now working absolutely perfect - all the time, every time!! 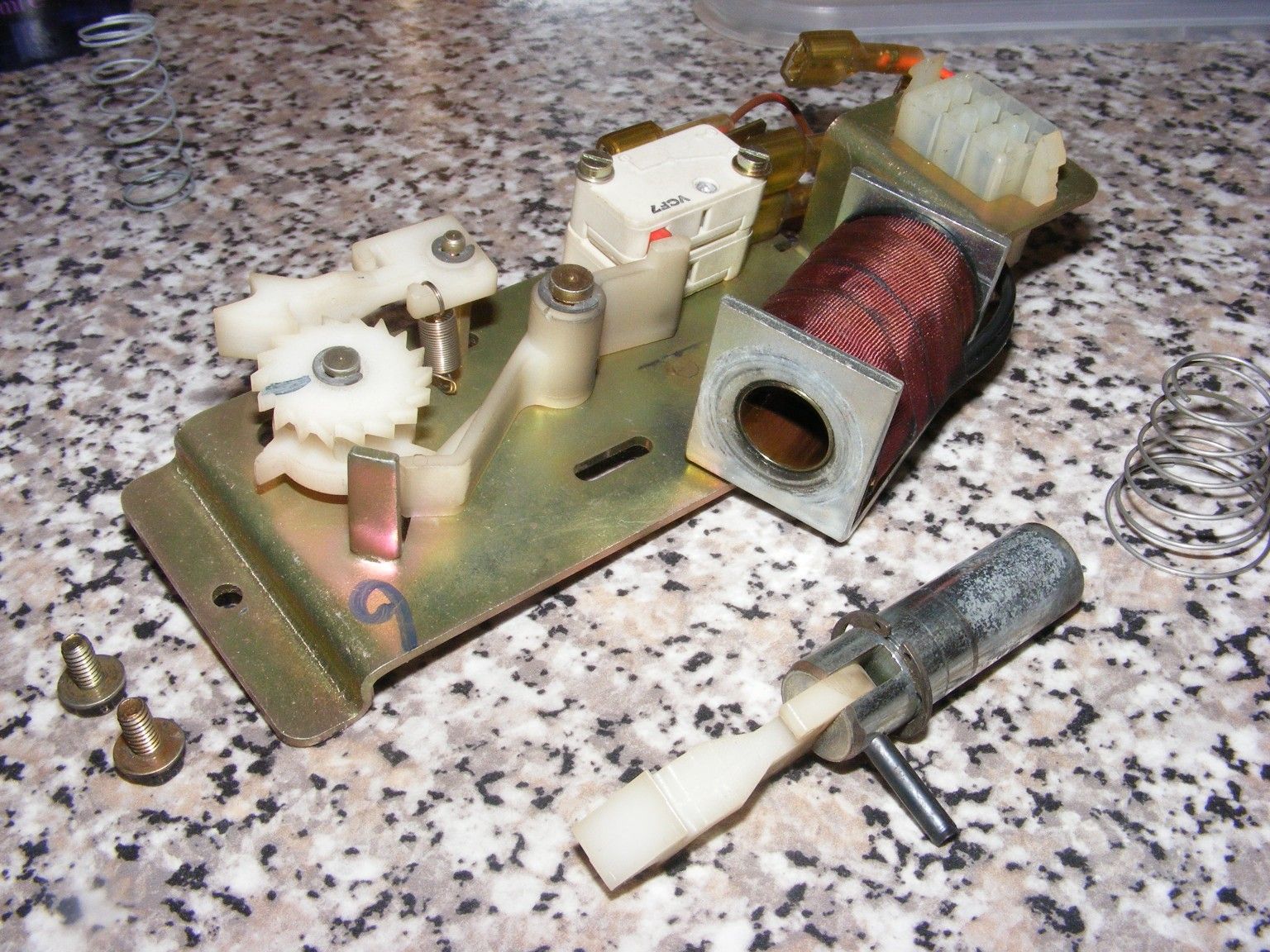 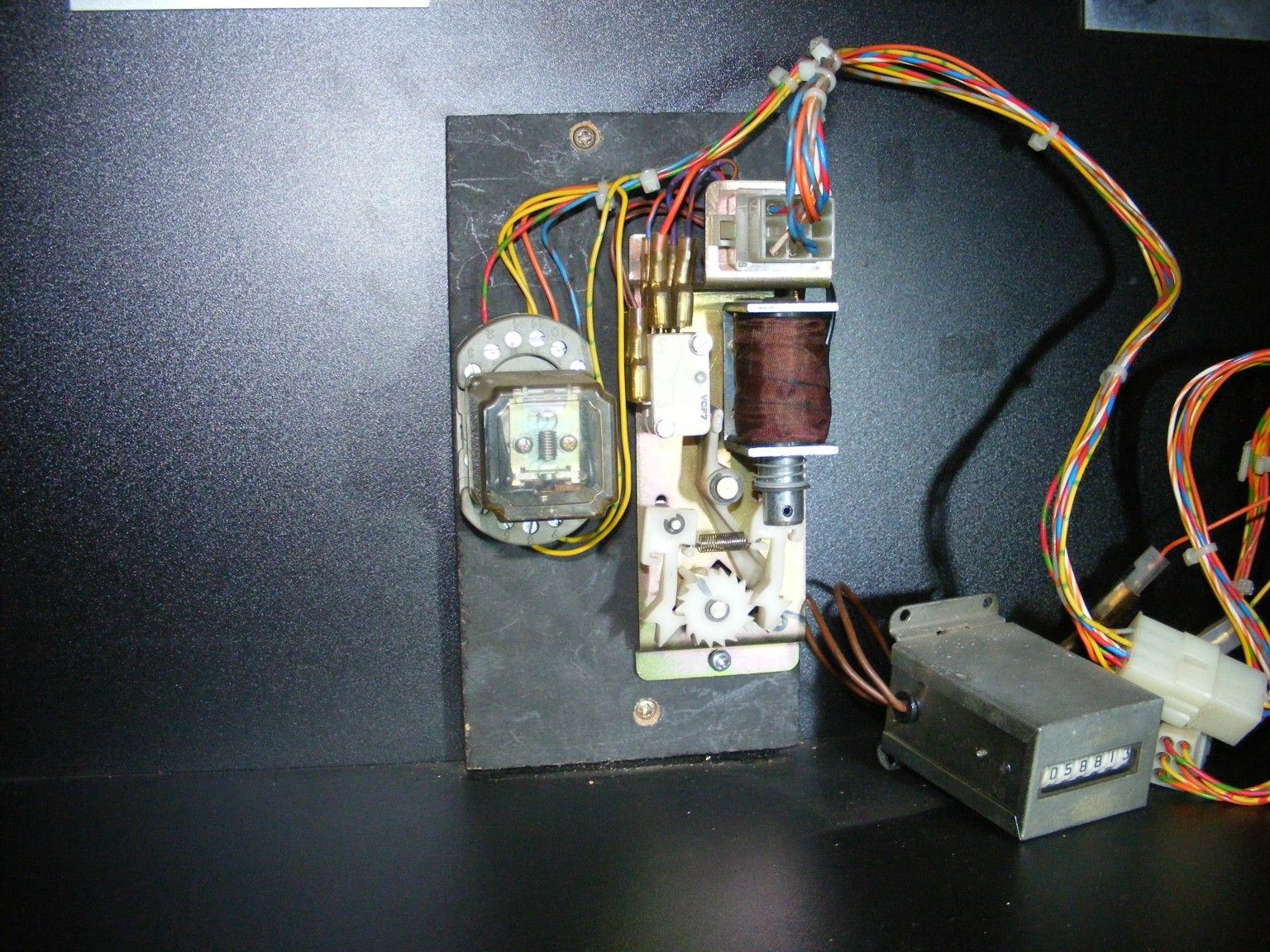 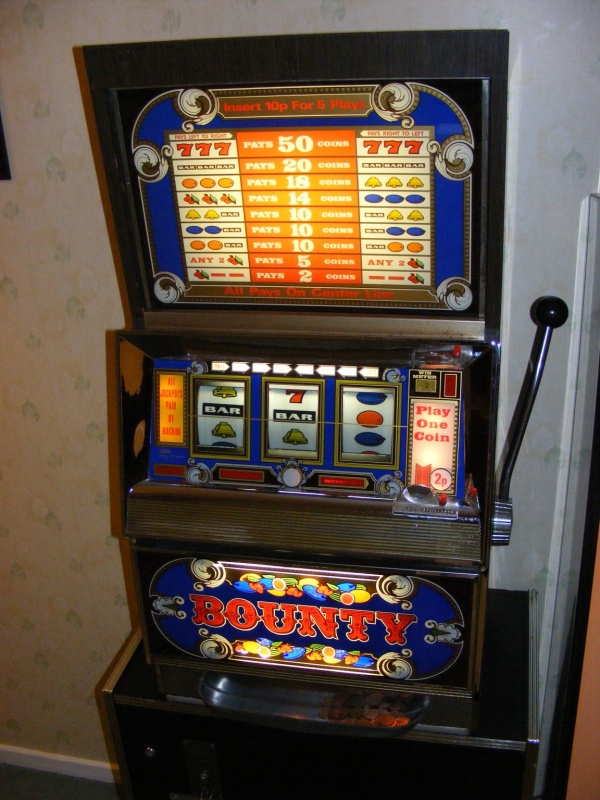 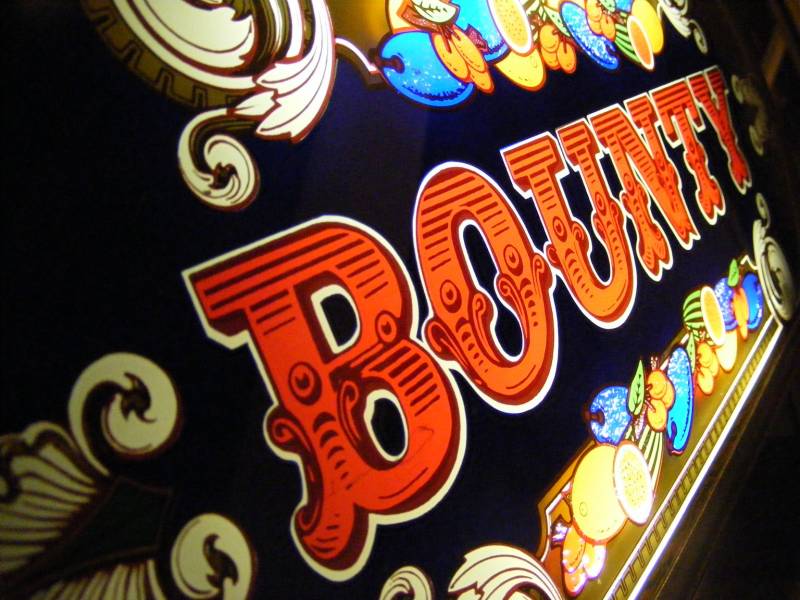 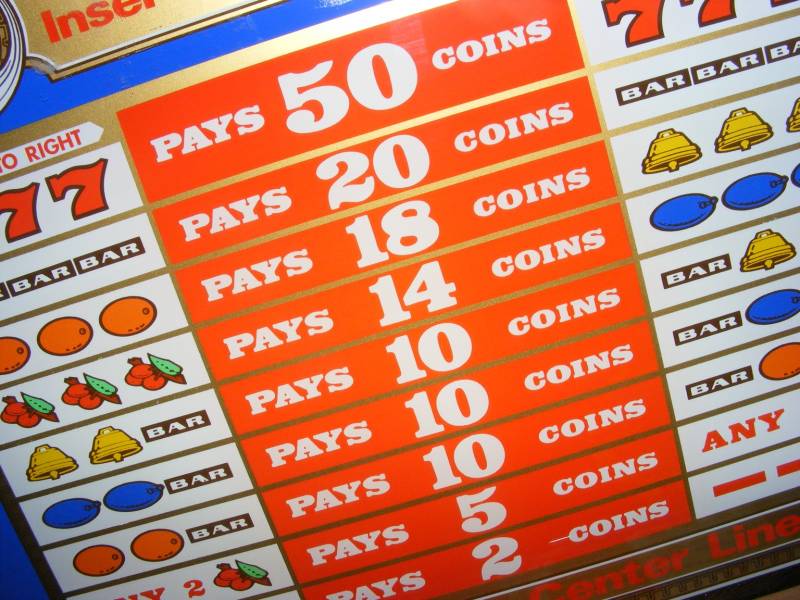